Posted on August 26, 2018 by Prospect Pipeline Leave a comment 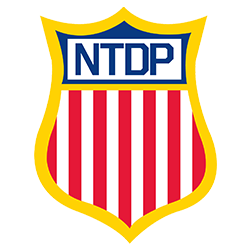 For comparison sake, Hughes’ point total fell just one short of the all-time NTDP record, which was set by none other than Auston Matthews during his second year with the program in 2014-15. Hughes appears to be set to annihilate the competition this year, where he will play both USHL and NCAA opponents, and will likely be a large part of USA’s U20 World Junior squad come December.

Jack Hughes is, simply put, a dynamic player who can dictate the game in any shift. He understands the game incredibly well for a 17-year-old, visibly outthinking his opponents and articulating the best play available before it develops. His skating is is exceptional, with the ability to blow by opponents as well as the elusiveness to cut in and out, and edgework that is second-to-none.

Putting those two attributes together results in an exemplary playmaker. Hughes utilizes his vision of the ice to understand when and where a lane will open up, and combines his skating abilities to maximize the output of his teammates. He can pull defenders towards him before setting up a wide-open teammate, or go to a quiet area with the puck before threading a pass through traffic.

It’s not an easy task to outline Hughes’ weaknesses, because there are seemingly none in his game. The one category that could use some improvement would be his strength. By no means is Hughes a towering center, but he certainly plays bigger than his size would indicate. His strength doesn’t hold him back in any manner at the NTDP level, but in preparing for the NHL, Hughes would be wise to add some muscle.

As a center, he definitely needs it to become reliable in the faceoff circle, in boxing out the opposing center from his own net-front, and to improve in board battles. Again, this is not necessarily a weakness as much as it is an area for potential improvement.

Jack Hughes forecasts to be a dynamic, point producing, first-line center in the NHL. He possesses all the tools to be a game-changer at the next level and should become a perennial all-star in just a few years. Comparables  include Patrick Kane and Clayton Keller. Hughes ranks as the consensus 1st overall pick for the 2019 NHL Draft heading into the ’18-19 season.