Posted on August 31, 2018 by Prospect Pipeline Leave a comment

Arthur Kailyev is a potent goal-scorer with a quick and powerful snap shot. He fit seamlessly into the OHL during his rookie campaign, playing like a four-year vet. His 31 goals and 48 points both led all U17 players in the OHL last year, as Kaliyev became the first 16-year-old to break the 30-goal plateau since Alex Galchenyuk did it in 2010-11 with te Sarnia Sting.

Kaliyev’s game is fine-tuned to the offensive aspects. Aside from his gifted shooting abilities, he boasts quick and creative hands, with the instincts to beat defenders one-on-one. Further, he utilizes his large frame to become a net-front nuisance who is difficult to box out. If Kaliyev can add some more muscle, he could become t\he next gifted power forward.

Arthur Kaliyev is an offence-first winger, and with good reason. His shot is years above his age, with a brisk and authoritative release, Kaliyev can get a high-danger shot off in tight quarters. His snap shot is accurate and deceptive enough to beat goaltenders straight up. Kaliyev is also endowed with soft hands, which allow him to corral the puck through traffic with ease. 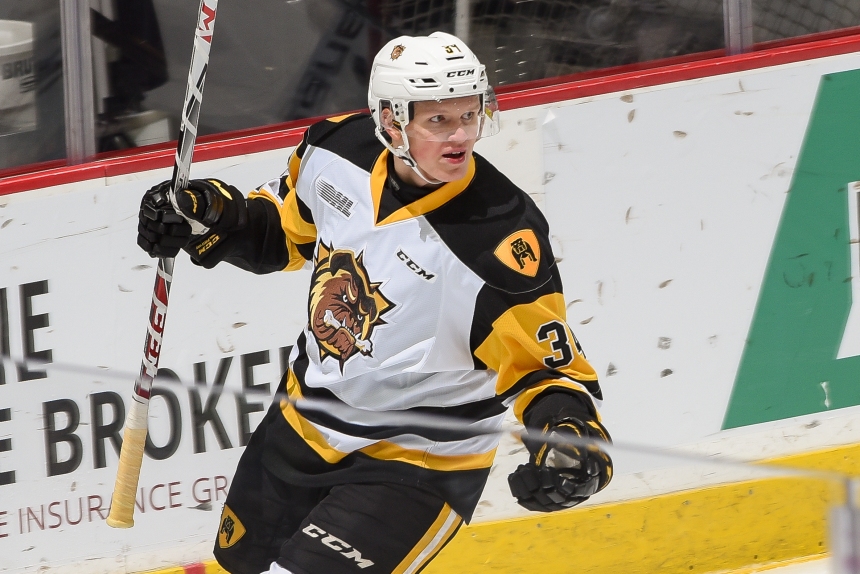 Arthur Kaliyev quickly became accustomed to celebrating goals in the OHL en route to a 31-goal rookie campaign, a number which led all U17 player. Photo Credit – Brandon Taylor.

Further to his offensive capabilities, Kaliyev has the size and strength to be a menace in front of the net. He has surprising lower-body strength, which he utilizes in board battles, cycles, and to protect the puck. As Kaliyev continues to grow and mature, this may become more of a benefit over his opponents as he develops towards a potential scoring power forward role.

On the other hand, Kaliyev remains an average skater without game-breaking speed. He accelerates well, but certainly has room to grow as far as agility and top speeds go. While these attributes obviously didn’t hold back his ability to find the twine, an improvement would do wonders for his all-around game.

As we know, an upside skating ability has become an imperative facet of today’s NHL. As such this aspect of Kaliyev’s game must be a focus of his training in order to have a productive future at the professional ranks. Time and time again, we’ve seen potential superstars fall short because of lacklustre skating. Here’s hoping that won’t be the case for Kaliyev.

Arthur Kaliyev looks to be a future top-six winger at the NHL level. While his defensive game and skating could still use some work, Kaliyev possesses a natural scoring ability and has the potential to be a dangerous power forward if he fills out his frame. Heading into the ’18-19 season, Kaliyev projects to be a Top-15 pick at the 2019 NHL Draft.