Posted on September 1, 2018 by Prospect Pipeline Leave a comment

Blake Murray provided a reason to watch the last place Sudbury Wolves in 2017-18, who won just 17 games all year. Murray, the 7th overall pick at the 2017 OHL Priority Selection, quickly rose up the Wolves’ depth chart, earning top-six minutes as well as significant power play and penalty kill time. He finished the year with 21 goals and 44 points in 57 games, leading all U17 OHL players in points-per-game.

Murray is a big center who excels is virtually every aspect of the game, from faceoffs to playmaking, and sniping goals to penalty killing. He showcases excellent hockey sense and vision of the ice, allowing himself to be a skillful passer. Murray has a strong shot with a very deceptive release and has the creativity to dangle goaltenders in tight.

Blake Murray is a coach’s dream player. He can be trusted to be put on the ice under any circumstances and give his team a better chance of winning. He makes the players around him better, and impressed so quickly with the Wolves that he was moved up to their top-six almost immediately. He ultimately wound up leading the team in both goals and points as a 16-year-old. 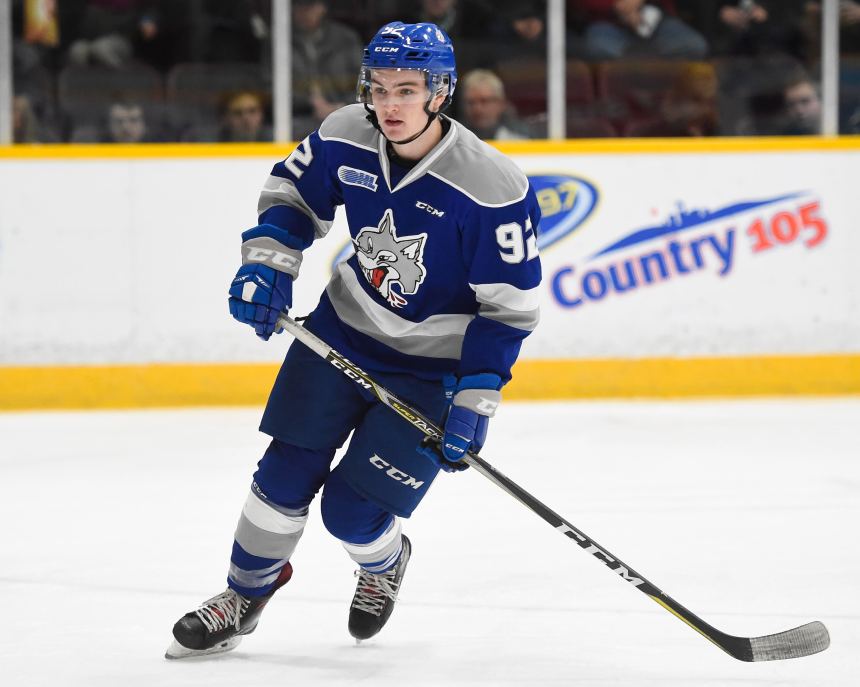 Blake Murray led the Wolves in goals and points in ’17-18 and is expected to be a leader for the team as a 17-year-old. Photo by Aaron Bell/OHL Images

Murray understands the game extremely well and can read and react to a developing play instantaneously. His wrist shot is unique, with a curl-and-drag release that proved to be deceptive for OHL goaltenders. He is also tremendous with the puck, scoring a number of highlight reel worthy goals in ’17-18. Further, he was trusted to center the team’s penalty kill with great success all year long, a testament to his all-around abilities.

It’s a tough task to find a weakness, or even an area of improvement, in Murray’s game. He does everything exceptionally, but if there’s one aspect of his game that could help boost his draft stock, it would be his skating ability. Don’t take this the wrong way, Murray is already a marvelous skater with above average speed, but his agility with the puck could use some improvement.

Although Murray possesses a silky pair of mitts, his legs can become stiff when he reaches his top speed. That is, his east-west movement with the puck decreases when he gets going. If Murray can advance his ability to weave and dangle while at top speeds, he could truly be considered a flawless prospect. Keep an eye on his point totals this year if he lines up alongside David Levin or Quinton Byfield.

Blake Murray forecasts as a potential first-line center at the NHL level who can be relied upon to produce oodles of offence as well as to take the defensive zone draws in crucial times. He can excel in all situations and is the definition of an all-around center. His style is comparable to Ryan O’Reilly of the St. Louis Blues. Heading into the ’18-19 season, Murray projects to be a Top-20 pick at the 2019 NHL Draft.