Posted on September 28, 2018 by Prospect Pipeline Leave a comment

The Florida Panthers have never won a Stanley Cup — in fact, the franchise hasn’t reached the final since 1996 when they fell to the Colorado Avalanche.

However, this fact could very well change in the coming years, as the Panthers are a strong and balanced team beaming with elite young skill. Led by Aleksander Barkov, Jonathan Huberdeau, and Aaron Ekblad, Florida presents an interesting challenge for their opponents given their breadth of size, speed, and skill.

And, more help is on the way — primarily in the forms of NCAA standout Henrik Borgstrom and OHL sniper Owen Tippett.

The State of the Panthers’ Farm System

Over the past ten seasons, the Florida Panthers have struggled mightily to score goals.

In fact, dating back to the 2007-08 campaign, the Panthers have averaged a mere 2.54 goals for per game — the NHL’s 30th-worst mark during that period of time. And, while Barkov and Huberdeau have done their fair share, their contributions alone have not been enough to propel Florida to any sort of meaningful success.

However, help is on the way for the Panthers in the form of elite young snipers and natural offensive players.

Arguably the most notable prospect which Florida possesses is Tippett, the team’s first-round choice in the 2017 NHL Draft — 10th overall.

A natural goal-scorer, Tippett boasts an elite shot which is not only strong but incredibly accurate too. Defined by its lightning-quick release, Tippett can beat goaltenders from a distance and is never afraid to unleash his shot — a major reason behind two 35+ goal seasons with the OHL’s Mississauga Steelheads.

The Panthers nabbed Serron Noel — a projected first round pick — with the 34th selection in the 2018 NHL Draft. (Photo Credit: Terry Wilson/OHL Images)

Further, the Panthers boast Henrik Borgstrom — the 23rd overall selection from the 2016 NHL Draft who is looking more and more like a hidden gem with every game he plays. During the 2017-18 season, Borgstrom exploded as a member of the University of Denver, recording 23 goals and 52 points in just 40 games played. An exceptional playmaker who sees the ice well, Borgstrom skated in four games for Florida last season and could claim a full-time role this coming season.

With these prospects sure to provide depth scoring for Florida down the road, the Panthers must now turn their focus towards defence and goaltending — an area of their farm system which is remarkably thin. Yes, the franchise is holding onto Samuel Montembeault, but a lack of up-and-coming defenders could risk the long-term sustainability of the organization if not addressed in the near future.

One Panthers Prospect to Watch

One Panthers prospect worth keeping an eye on this coming season is Tippett.

With seven games of NHL experience already under his belt, Tippett is a sizeable forward who should have little trouble transitioning to the NHL-level. At 6-foot-1 and 200-pounds, Tippett already boasts NHL size and owns the skating abilities necessary to make an offensive impact at hockey’s highest level. 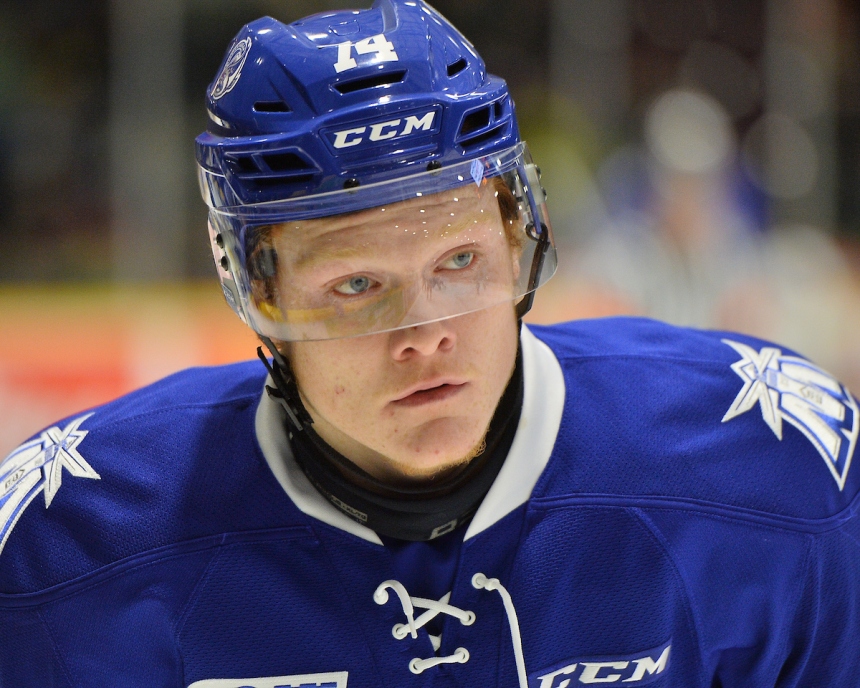 With his lethal skill-set, Tippett could be a 50-goal scorer at the NHL-level. (Photo Credit: Terry Wilson/OHL Images)

One facet of Tippett’s game which must improve — and especially so if he wishes to garner considerable ice time with Florida — is the youngster’s play away from the puck. Although he is incredibly lethal while in possession, Tippett needs to learn how to have a greater impact in the defensive zone — as doing so would lead to greater transitional play for both he and his fellow teammates.

Eerily similar in playing style to Phil Kessel of the Pittsburgh Penguins, Tippett has the shot and skill-set necessary to become an elite offensive player at the NHL-level. If he can stabilize his all-around game, the Panthers could be looking at a future 50-goal scorer.