Posted on October 23, 2018 by Prospect Pipeline Leave a comment

The Washington Capitals are the reigning Stanley Cup champions, yet that doesn’t mean that the franchise can afford to overlook its farm system.

Although led by star goaltender Ilya Samsonov, the Capitals’ current pool of prospects stands remarkably thin. With a select few forwards and defenceman likely to see ice time at the NHL-level in the near future, Washington must turn its focus towards it farm system if the franchise wishes to attain sustained postseason success.

Complicating matters for the Capitals is their lack of draft choices ahead of the 2019 NHL Draft — a class shaping up to be one of the deepest in recent years. With just five selections in-hand, Washington does not stand in a position of strength with respect to supplementing their prospect pool — a stance which could pose a risk to the Capitals’ long-term success.

The State of the Capitals’ Farm System

As mentioned above, Washington’s farm system is noticeably thin. Sure, the franchise holds a number of promising prospects, yet the vast majority of which do not project to become impact players at hockey’s highest level.

Of the lot, it is Samsonov who is undoubtedly the organization’s most promising young player. Nabbed by the Capitals with the 22nd overall selection in the 2015 NHL Draft, Samsonov is a sizeable and highly athletic goaltender with a stellar track-record of success at the KHL-level. As a three-year veteran of the league, Samsonov boasts plenty of professional playing experience and the skill set necessary to compete against the NHL’s best.

Set to tend the crease for the Hershey Bears of the AHL this season, Samsonov’s ability to adjust to the North American game will stand as a major indication of his potential with the Capitals. If able to enjoy a seamless transition, Samsonov could arrive in Washington sooner than later an embark upon a serious run for the starting position.

Outside of their goaltender of the future, Washington holds two strong and dynamic defenders who could one day claim depth roles with the team.

In Jonas Siegenthaler — a second-round choice in the 2015 NHL Draft — the Capitals boast a smooth-skating defender who pairs his size with his playmaking abilities with virtual ease. Although he isn’t a lethal offensive force by any means, Siegenthaler can log major minutes and supplement his team’s attack through crisp and consistent puck movement.

Moreover, Washington features Alexander Alexeyev — the team’s first round choice in the 2018 NHL Draft. Standing 6-foot-3 and weighing 200-pounds, Alexeyev is an intimidating defender who has quickly come to be known for his emerging offensive play. In fact, in the campaign leading up to his selection by the Capitals, Alexeyev notched 37 points in 45 games played with the WHL’s Red Deer Rebels — a glowing indication of his potential as a two-way defenceman.

Unfortunately, Washington’s prospect cupboard is relatively thin outside of these three prospects. Yes, the likes of Connor Hobbs and Lucas Johansen certainly boast potential, however, it remains to be seen whether or not either are capable of playing a legitimate role at the NHL-level.

If the Capitals wish to improve their farm system through the 2019 NHL Draft and in  years beyond, they’ll need to nab promising youngsters outside of the first round with some level of consistency.

One Capitals Prospect to Watch

One Capitals prospect worth watching who wasn’t mentioned above is Kody Clark.

The son of former Toronto Maple Leafs legend Wendel Clark, Kody plays a game very similar in some respects to his father’s. Standing 6-foot-2 and 185-pounds, Clark is a sturdy winger with above average speed and quick hands. Although he was chosen by the Ottawa 67s in the sixth-round of the 2015 OHL Priority Selection, the native King City, Ontario has steadily carved out his place at the OHL-level. 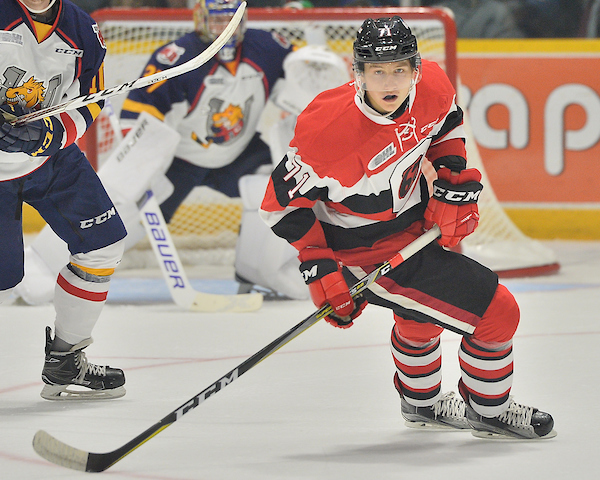 What makes Clark such a valuable asset — as proven by his second-round selection by the Capitals in the 2018 NHL Draft — is his driven and competitive nature. Never truly out of a battle and tireless in his pursuit of the puck, Clark commands puck possession for his team and can quickly generate offence once in control. What’s more is that Clark boasts a stellar wrist shot, and one which has the potential to beat opposing netminders clean.

Although he stands more than a few years away from competing for a roster spot with the Capitals, Clark is an intriguing prospect nonetheless owing to his offensive capabilities and hockey bloodlines. If able to develop consistently in the coming years, Clark could seize a vital depth role in Washington in the future.