The Curious Case of Josh Ho-Sang

Posted on October 29, 2018 by Prospect Pipeline Leave a comment

Josh Ho-Sang of the New York Islanders is an exceptionally talented young player — of this there is no doubt.

However, despite displaying his skill and lethal offensive abilities on a consistent basis, Ho-Sang has thus far failed to seize a full-time role at the NHL-level. Skating for the Bridgeport Sound Tigers of the American Hockey League to begin the 2018-19 season, Ho-Sang’s abilities on the ice have seemingly — and wrongfully — become regularly overlooked by his play on the defensive side of the puck.

As a dynamic player capable of changing the outcome of a given contest in the blink of an eye, the time has come for Ho-Sang to accept a full-time role with the Islanders. Although buried in the AHL in past seasons by New York’s former managerial team, the arrivals of new General Manager Lou Lamoriello and Head Coach Barry Trotz could — and should — afford the now 24-year-old with a renewed opportunity to prove himself as an elite prospect and player.

A Track Record of Production

All throughout his career to-date, Ho-Sang has remained a productive and consistent offensive player.

Drafted by the Islanders from the Ontario Hockey League’s Windsor Spitfires in June of 2014, Ho-Sang collected an impressive 292 points in his 256 game major-junior career. Alongside 82 goals, Ho-Sang tallied a remarkable 210 assists — a glaring indication of his ability to see the ice and create potent plays within it. 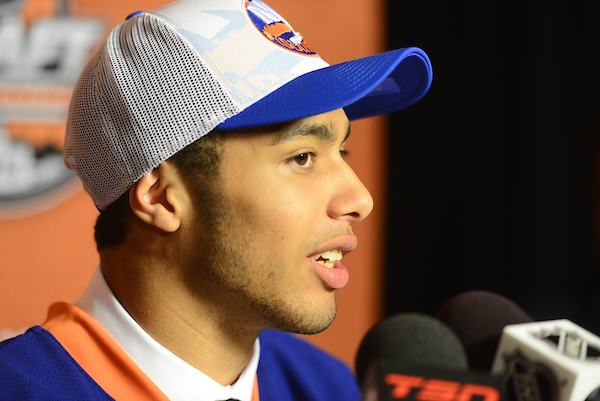 Since ascending to the professional ranks, Ho-Sang has continued to assert himself as an offensive threat. Sure, his production may have slipped slightly, yet the native of Thornhill, Ontario has continued to stand as a driving force behind his team’s attack.

Playing to a 0.6 point-per-game mark in the AHL and a 0.5 point-per-game mark in the NHL to open the 2018-19 campaign, Ho-Sang has displayed the ability to read and adapt to the ever-changing challenges presented by opposing defenders. With his determination and creativity at an all-time high, Ho-Sang’s improved skating, strength, and maturity have combined to make him a much different — and better — player than in years passed.

Eager to Make His Mark

Given his long-time potency and sky-high potential, it goes without saying that Ho-Sang is ready to contribute at hockey’s highest level.

With long-time captain John Tavares now skating for the Toronto Maple Leafs, New York will need an influx of offensive creativity now more than ever before. Now, this is not to say that Ho-Sang could replace Tavares, but rather that the youngster’s offensive abilities could help to supplement the Islanders’ suddenly porous attacking game.

Josh Ho-Sang makes the sweet deke and finishes off with a classic celebration #NYIvsBUF pic.twitter.com/EJFkYkcxAy

As a player well-known for his offensive game, now could prove to be the perfect time to introduce Ho-Sang into New York’s roster as a full-time player. What’s more is that not only do the Islanders need Ho-Sang, but Ho-Sang is ready to prove his critics wrong through the process of becoming a full-time NHL player.

Often denounced for his abilities in his defensive zone, Ho-Sang has learned a great deal from his lengthy time in the AHL and is surely more than ready to cast aside anyone who once doubted his abilities on the ice. Yes, his relationship with the Islanders has been rocky at times, however, both sides would undoubtedly benefit were Ho-Sang to be promoted to the NHL-level.

Ultimately, New York needs to play Ho-Sang in situations deserving of his skill-set or allow the youngster to move on to an NHL franchise who will truly value his on-ice capabilities.

With 22 points in-hand across just 43 regular season NHL contests to date, Ho-Sang has clearly illustrated his potential as an NHL player and as one more than capable of becoming a premier offensive player once fully developed. No, his game is not perfect, yet earning ice time against the world’s best competition on a nightly basis would surely serve as the best recipe for Ho-Sang’s future success.