Posted on May 24, 2019 by Prospect Pipeline Leave a comment

Despite a red-hot start to their 2018-19 campaign, the Barrie Colts struggled down the stretch and wound up missing the post-season.

Skating to a 26-38-4 record, the Colts were hampered by a slew of injuries throughout their most recent season — one which also saw a number of long-time Colts and fan favourites traded out of town ahead of the deadline. These transactions significantly decreased the experience and average age of Barrie’s lineup, as the Colts went on to ice the youngest team in the OHL in 2018-19. 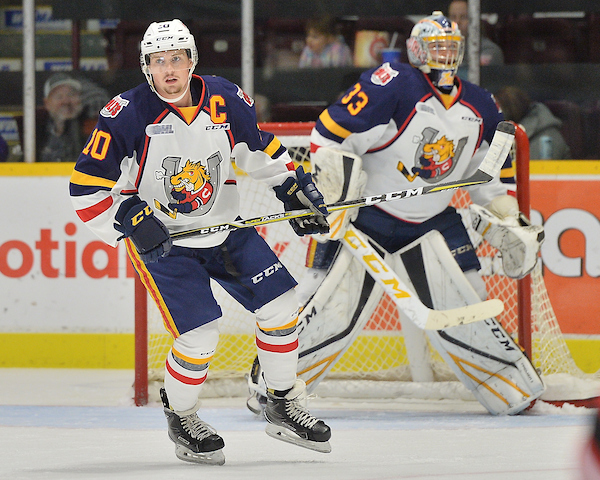 The departure of team captain Justin Murray this past season — amongst a slew of others — decimated Barrie’s depth and ability to compete for the postseason. (Photo Credit: Terry Wilson / OHL Images)

However, it is the young age of the Colts’ roster which is brewing a great deal of hope and excitement within the organization and the city’s fan base. With a number of highly touted prospects eager to leave a lasting impression at the OHL-level this coming season, the Colts’ poor campaign in 2018-19 will likely be forgotten once the 2019-20 version of the club takes to the ice with a renewed sense of purpose and ability.

With this being said, here are five storylines to follow regarding the Colts which could prove crucial to their success or failure this coming season. Although a number of questions continue to surround the team, the fact remains that the future of OHL hockey is incredibly bright in Barrie.

Here are our five key storylines to follow in Barrie this season. Although the answers to these questions are not immediately known, the outcomes which arise from the situations below will likely dictate the success or failure of the Colts in 2019-20

1. Who Will Seize the Colts’ Crease?

Likely to be selected by an NHL franchise come the 2019 NHL Draft in June, Greaves is a highly athletic and competitive netminder who makes highlight-reel saves with incredible consistency. Square to opposing shooters and never taken out of the play, Greaves proved that he can afford the Colts with an opportunity to win each and every time he takes to the crease — a quality which will prove incredibly valuable given the youth of Barrie’s projected lineup this coming season.

If Greaves, alongside Edmonds, can provide the Colts with stability in the crease this season, it will undoubtedly inflate the confidence of Barrie’s young players and provide them with a solid foundation for success in the years ahead.

2. Can Riley Piercey Take the Next Step?

Nabbed by the Colts with the 16th overall choice in the 2018 OHL Priority Selection, Riley Piercey has all of the qualities of an elite offensive player at the OHL-level. A smooth-skater, Piercey features a strong shot, natural playmaking abilities, and the drive necessary to penetrate opposing defences and generate offensive opportunities for his team.

His rookie season, however, left something to be desired. Come to the end of the 2018-19 season, Piercey had put forth three goals and 14 points — a total which ranked him as the 42nd-highest scoring rookie in the league. Moreover, Piercey’s three goals placed him in a tie for 48th overall in rookie goal scoring — two outputs which were not reflective of his abilities or ultimate potential at the OHL-level.

An undeniable talent, Piercey has the skill-set necessary to become an impact player and go-to force for the Colts. If he can enjoy a breakout season in 2019-20 — an outcome which would not come as a surprise — Barrie will surely be well on its way to a playoff-berth.

When the time came for the Colts to make their first round selection in the 2019 OHL Priority Selection, there was no question as to who they would be selecting. In Brandt Clarke, the Colts added a dynamic two-way defenceman with size who will be one of the top defence prospects to compete in the OHL in quite some time.

The one question surrounding Clarke is just how quickly can he transition to the OHL-level?

Behind the scenes at #OHLDraft 👀

Absolutely dominant for the Don Mills Flyers of the GTHL in 2018-19, Clarke has the ability to alter the course of any given game which he competes within and can do so with ease at both ends of the ice. Given his size and strength, Clarke should not be overmatched in his defensive zone — it is his desire to rush the puck and push the pace offensively which will surely take longer to develop against an increased level of competition.

4. Can Ryan Suzuki Lead a Rebound in Barrie?

As a former first overall selection in the OHL Draft, Ryan Suzuki has yet to come close to reaching his ultimate potential. This particular fact was on full display this past season, as Suzuki continued to lead the Colts’ attack at both ends of the ice despite a lack of consistent support from within Barrie’s lineup.

Ryan Suzuki has the skill-set and potential necessary to lead a resurgence in Barrie. (Photo Credit: Terry Wilson/OHL Images)

With this being said, if there was one player to lead a resurgence in Barrie, it is no one other than Suzuki. An uber-creative playmaker whose goal-scoring abilities continue to improve, Suzuki’s two-way play is simply sensational and will only improve alongside the strengthened abilities of his fellow teammates. If the likes of Piercey and Clarke can play vital roles in 2019-20, look for Suzuki to lead the Colts back to a playoff-berth.

An incredibly talented puck-handler who starred for the Toronto Nationals of the GTHL this past season, Ryan Del Monte was a clever selection by the Colts in the second round of the 2019 OHL Draft. A playmaker first and foremost, Del Monte can devise lethal opportunities with relative ease and is no stranger to firing the puck into the back of the net. However, injuries hampered the second half of Del Monte’s minor midget season — a reality which left many questioning his value in the Priority Selection.

However, the Colts did not hesitate in selecting Del Monte with the 24th overall selection, as the youngster could very well become a crucial depth player for Barrie this upcoming season. Although he isn’t the biggest player on the ice, Del Monte’s ability to elude his opponents should allow him to enjoy a substantial amount of success as a first-year player. If Del Monte’s creativity and confidence can transition to the OHL-level without issue, the Colts could stand poised to receive far more depth scoring than they initially anticipated.