Posted on June 14, 2019 by Prospect Pipeline Leave a comment

The Guelph Storm were the champions of the Ontario Hockey League in 2018-19, battling hard against stern competition in their opening three rounds before shocking the Ottawa 67’s in just six games to claim the J. Ross Robertson Cup. Mid-season acquisitions played a major role in the success of the Storm, as a number of highly touted NHL prospects — led by Nick Suzuki — came together to push Guelph to the Memorial Cup.

Despite falling in the semi-finals of the prestigious tournament to the Rouyn-Noranda Huskies, the Storm established themselves as a premier threat and one of the strongest, most complete teams within the major-junior circuit this past season. However, with the vast majority of Guelph’s high-end players destined for professional careers in 2019-20, the Storm now head towards an uncertain future. Boasting a suddenly thin lineup, the most significant challenge facing Guelph in 2019-20 will undoubtedly be their ability to cope with the lack of depth and experience present within their roster.

Quiet, humble & calm are just a few things that came to us in the shape of @nsuzuki_37 in January, making him almost a secret weapon until it wasn't so secret anymore.

For the highlights, new playoff points record & the whole ride, all with outstanding character, thank you Nick. pic.twitter.com/DaJ4uQQdD6

If the Storm wish to avoid a championship slump, they will need to rely heavily on the contributions of their younger players while affording returning veterans with crucial playing time in high-leverage situations. If able to receive consistent goaltending from Anthony Popovich, Guelph could stave off their bitter Western Conference rivals until their new core of talented youngsters stands ready to lead the team into the immediate future. Unfortunately, if exactly such does not transpire, the Storm could fail to reach the postseason for the third time in just five seasons.

Fresh off of their second OHL Championship this decade, the Storm head towards the 2019-20 season with far more questions than answers. Effectively, Guelph will look to avoid the championship slump which has hampered a great number of teams in past years.

If able to sport a solid trio of overage players while receiving substantial contributions from their newest players — Marko Sikic being the latest of which — the Storm could very well remain as a lethal threat in the Midwest Division.

1. Can the Storm Avoid a Championship Slump?

Over the past five seasons, the reigning OHL champion has not been able to surpass the second round of the postseason after hoisting the J. Ross Robertson Cup. Now, while many would not consider reaching the second round of the playoffs a championship slump, other reigning victors have failed to reach the postseason all together owing to the massive outflow of elite and experienced talent which tends to follow hoisting the cup. 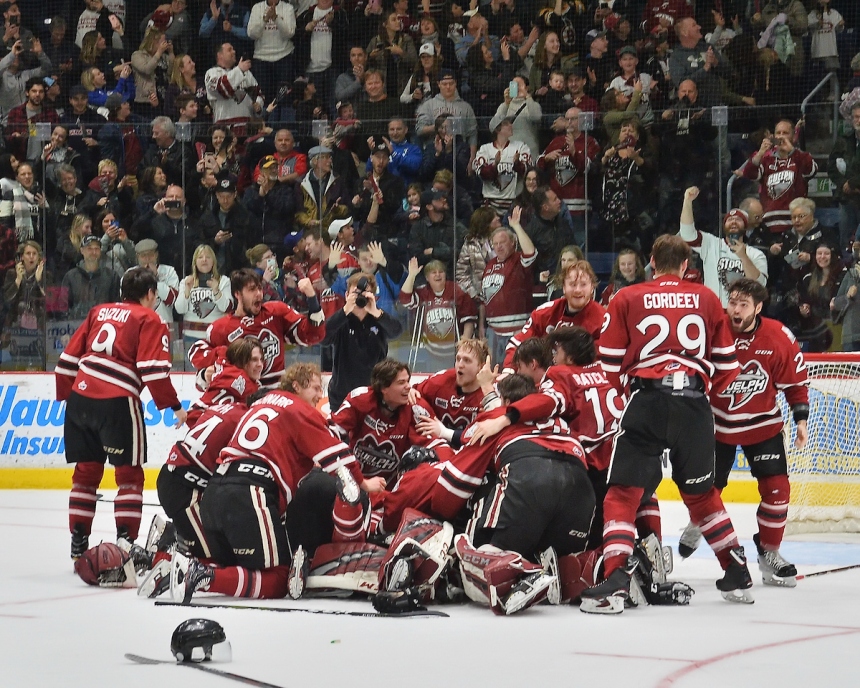 The 2019-20 edition of the Guelph Storm will look dramatically different than the one which captured the J. Ross Robertson Cup. (Photo Credit: Terry Wilson / OHL Images)

Unfortunately for the Storm, the team could be staring down a significant slump in 2019-20, as the vast majority of Guelph’s top players — a number of which who were acquired in trade — will be embarking upon professional careers this coming campaign. Additionally, over-agers Domenico Commisso, Jack Hanley, and Sean Durzi will all be moving on from the Storm due to their age — a reality which force Guelph to ice a largely unfamiliar roster this coming season. However, the Storm could avoid a slump in 2019-20 if their emerging young talent can come to play significant if not surprising roles with the team.

When the 2019-20 OHL season came to a close, the Storm held a whopping twelve 1999-born players on their roster. Given that the over-age brith year has now shifted to 1999, Guelph will only be able to have three of these 12 players on its roster for the upcoming campaign. With Nick Suzuki, Isaac Ratcliffe, MacKenzie Entwistle, Dmitri Samorukov, Nate Schnarr, Marcus Phillips, and Fedor Gordeev all sure to begin their professional careers this coming season, it appears as though the Storm will have to choose three of five remaining 1999-born players to keep on their roster next season.

These five remaining players are none other than Liam Hawel, Anthony Popovich, Cedric Ralph, Zachary Roberts, and Alexei Toropchenko. To choose three of these players is no simple task, and a job which George Burnett surely wishes he could avoid. Of the lot, it is Popovich who arguably holds the greatest value to the team — he recently led to Storm to OHL championship and is a composed competitor in the crease. Next, there is Hawel, a towering centre who enjoyed a breakout offensive season in 2018-19 whose presence should ease the transition of Guelph’s young prospects. Finally, there is Ralph, a diminutive yet highly competitive player whose presence down the middle would provide Guelph with much needed depth this coming campaign.

In short, exactly which 1999-born players will stay and which will go remains up for debate. However, the fact remains that these will be extremely difficult decisions for Burnett and his staff to make in the weeks and months ahead.

3. Can Collins, Chayka, and Terry Erupt?

Playing time was extremely difficult to come by for Guelph’s 2002-born class of prospects throughout the 2018-19 campaign, as the Storm’s roster was laden with experienced players en route to their clinching their first OHL Championship since 2013-14. However, this reality is poised to change in a major way come the 2019-20 season, as the vast majority of Guelph’s seasoned veterans will be moving on to professional careers throughout North America.

Guelph’s blue line could be steadied in 2019-20 if Chayka — amongst others — can explode at both ends of the ice. (Photo Credit: Terry Wilson / OHL Images)

With this being said, the door will be wide open for the likes of Ty Collins, Daniil Chayka, and Zack Terry to secure highly valuable playing time. In Collins, the Storm hold a natural goal-scorer eager to set loose upon the OHL and its netminders. Further, in Terry and Chayka, Guelph boasts two potential defensive pillars who could come to lead the team at both ends of the ice for years to come. If the three youngsters mentioned above — alongside others such as Matthew Papais — can put forth significant contributions this season, the Storm just might be able to avoid the drought which has claimed so many OHL champions in the past.

4. Will Guelph’s Blueline Buckle and Break?

Sean Durzi, Fedor Gordeev, Jack Hanley, Markus Phillips, and Dmitri Samorukov — all five of these defenders will likely see their OHL tenures come to an end in 2019-20 as they embark upon professional careers. With this being said, the Storm’s blue line will be a skeleton of what it was throughout the 2018-19 season and into the OHL Playoffs, as only Chayka, Owen Lalonde, and Terry stand poised to return to the team’s blue line.

As such, it goes without saying that Guelph’s blue line stands in need of dramatic improvement ahead of the 2019-20 campaign. While Chayka, Lalonde, and Terry are all more than capable of logging significant minutes in high pressure situations, the trio will need to rely upon a competent supporting cast of incoming defenders if the Storm hope to stand as a viable threat in the Western Conference this coming season. Unfortunately, help in the form of 2003-born prospects could prove hard to come as, as the Storm’s top-two defence prospects from the 2019 OHL Draft — Dylan Gratton and Declan Ride — both appear destined to fulfill their NCAA commitments.

With a number of the Storm’s elite offensive players poised to begin their professional careers in 2019-20 — namely the likes of Nick Suzuki, Isaac Ratcliffe, and Nate Schnarr amongst others — Guelph will need to receive significant contributions from its younger core if it wishes to remain competitive. One player who could provide much needed offensive firepower this coming season is Danil Zhilkin, the team’s first round choice in the 2019 OHL Priority Selection.

Danny Zhilkin makes it 4-2 after scoring high over Blackburn to cut the lead in half.

The commentator said the score was in favour of Ontario, but they trail 4-2. #OHLDraft #CWG2019 pic.twitter.com/Tg3j47JtCh

Nabbed by the Storm with the 14th overall choice, Zhilkin is an uber-talented puck handler who boasts a stellar shot defined by its pin-point accuracy. A smooth skater as well who plays with an edge, Zhilkin’s well-rounded game could help to supplement Guelph’s offensive attack given the loss of a number of their top scoring players. Although it could take Zhilkin some time to adjust to the OHL-level, his already significant size should allow him to transition to major junior hockey easier than most prospects his age.