Posted on June 28, 2019 by Prospect Pipeline Leave a comment

For the 217 players chosen in the annual NHL Entry Draft, the moment when one’s name is called is nothing other than a dream come true.

For those who have worked their entire lives only to be overlooked on draft day, the disappointment is not only significant but — at times — overwhelming. However, those who do not hear their names called always come back bigger, better, and more determined than every before. This will surely be the case for the ten prospects which we have profiled below, as each of which was widely anticipated to be chosen in the 2019 NHL Draft only to go un-drafted. 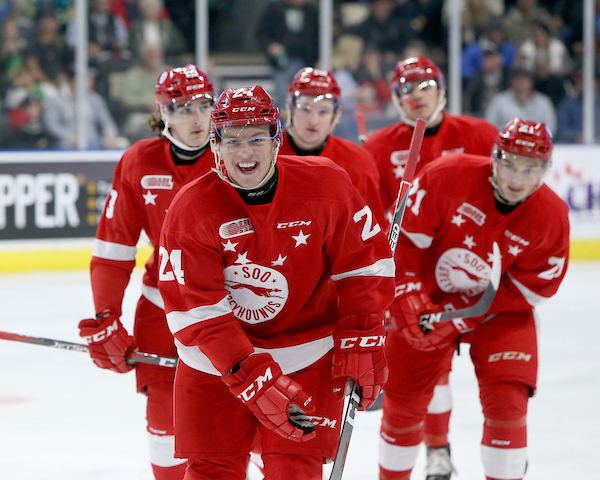 Cole Mackay was one of many players not chosen in the 2019 NHL Draft who certainly should have been. (Photo Credit: Luke Durda/OHL Images)

As far as these ten players go, a number of which have long been regarded as top prospects while others attracted the heat of the spotlight in recent years. Native to a number of different countries and seasoned within a variety of developmental leagues, these ten players are all widely skilled yet hold one reality in common — despite their best efforts, they weren’t drafted by an NHL organization.

Yet, with this being said, expect each and every one of the players listed below to return to the ice in 2019-20 with a renewed sense of purpose. All prospects develop at different paces, meaning that there is nothing standing in the way of these young men and long-term career at hockey’s highest level.

With this being said, let’s dive into our list of ten prospects who weren’t drafted that should have been. This list is alphabetically order, and features a number of names which will surely command the attention of the hockey world in the weeks, months, and years ahead.

A steady two-way player, Isac Andersson brings tact and skill to the ice on a nightly basis. Having represented Sweden on the international stage on multiple occasions, it appeared as though Andersson would, without a doubt, be selected by an NHL franchise come the 2019 NHL Draft. However, the Draft came and went without Andersson’s name being called — a surprising reality based upon his steadily improving play. Although he wasn’t projected to be selected in the early rounds of the event, the fact that Andersson was overlooked completely stood as a significant surprise based upon his steady growth as a young player.

A former fourth-overall selection in the WHL Bantam Draft, it appears as though Logan Barlage is finally beginning to find his footing at the major-junior level. Following a sub-par rookie season in which he was traded by the Swift Current Broncos, Barlage took a signifiant step in the right direction in 2018-19 — posting 15 goals and 39 points for the Hurricanes. However, despite a significant increase in his offensive productivity, Barlage and his 6-foot-4 frame were not selected during the 2019 NHL Draft. Undoubtedly improving, Barlage stands poised to explode in 2019-20 and could come to stand as one of the top 2001-born players eligible for the 2020 NHL Draft.

The second overall pick in the 2017 OHL Priority Selection, Tag Bertuzzi has all the makings of a top NHL prospect — size, skating ability, strength, and natural offensive instincts. However, thus far, Bertuzzi has been unable to combine his skill set into consistent offensive production at the OHL-level. 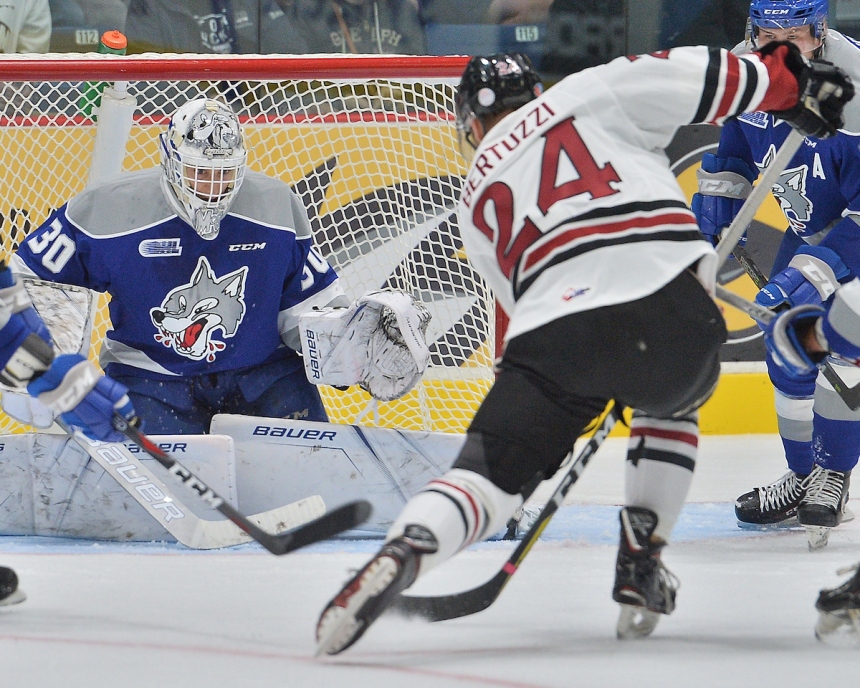 Despite a tumultuous start to his OHL career, Bertuzzi holds a great deal of long-term potential. (Photo by Terry Wilson / OHL Images.

What’s more is that Bertuzzi was hampered by the injury bug in his first season of NHL Draft eligibility, appearing in just 30 total games during the 2018-19 campaign. Set to skate for the Hamilton Bulldogs this coming season, don’t be surprised if Bertuzzi breaks out in a major way and re-establishes himself as a top prospect in the process.

The fact that Billy Constantinou was not chosen in the 2019 NHL Draft is simply mind-boggling. Sure, he struggled defensively following his trade to the league-worst Kingston Frontenacs last season, however, Constantinou is simply dominant when in possession of the puck and already boasts the ability to quarter-back his team’s power play despite his young age. With Shane Wright amongst others joining his cause in Kingston, look for Constantinou to become an integral member of a powerhouse Frontenacs squad in the years ahead. Of incredible poise, intelligence, and defensive instincts, NHL teams will, without question, come to regret passing on Constantinou.

In his second season of play for the Sault Ste. Marie Greyhounds of the OHL, Cole Mackay improved his offensive production by a whopping 47 points and came to play a vital two-way role for his team. However, despite blasting home 27 goals and a career-high 61 points, Mackay’s efforts were not strong enough to warrant a selection in the 2019 NHL Draft.

FINAL – Cole MacKay completes his first career OHL hat trick and leads the Hounds to a 6-3 VICTORY over the @GoLondonKnights !!!

Sure, his production stumbled slightly in the postseason owing to a reduction in playing time, however the fact remains that MacKay can contribute with impressive consistency and holds the size and strength necessary to succeed at the professional level in the near future. In short, neglecting MacKay was a massive oversight by all 31 NHL franchises.

A native of Haapajarvi, Finland, Wiljami Myllyla shot the lights out as a member of HIFK U20 this past campaign — netting 20 goals and 40 points in his 52 games played with the team as an 18-year-old. An agile and hard-working forward, Myllyla is a natural goal-scorer who can also distribute the puck when his opposition fails to respect his playmaking abilities and innate sense of vision on the ice. Sure, his 6-foot, 160-pound frame leaves something to be desired, however, the fact remains that Myllyla is a crafty offensive player who could very well attain an NHL career in the near future if he continues to improve and develop at his current pace.

Early in the 2018-19 season, Dmitri Sheshin was projected to be made a top-100 selection in the 2019 NHL Draft. A speedy skater and devastating offensive player, Sheshin’s ability to generate offensive on a consistent basis — against stern competition, no less — drew the attention of numerous scouts and organizations throughout the world. However, come Draft day, Sheshin’s name was not called.

Here is the Russian SH tally to take the lead n this one. Jack Hughes thinks he is going to just corral this puck and go, but Dmitri Sheshin has other ideas.

He goes hard on the puck, controls and feeds Rodion Amirov for the shortie. #U18Worlds #NTDP pic.twitter.com/987YSlfGjN

Despite recording 43 points in his 45 games played in the MHL — an output which carried the greatest point-per-game rate of any player his age — Sheshin had not done enough to warrant selection. This oversight likely occurred due to Sheshin’s size, as the youngster stands just 5-foot-8 and weighs in at 145-pounds. However, with the NHL becoming less and less concerned with the size of its prospects — see the Montreal Canadiens’ Cole Caufield — the fact that Sheshin was overlooked is simply shocking.

A first round choice of the Lethbridge Hurricanes in the 2016 WHL Bantam Draft, Luke Toporowski is quickly rounding into the player that Lethbridge believed that he could become. After posting 23 points as a rookie, Toporowski turned it up a notch this past season by netting 21 goals and 49 points. An excellent skater of good size and innate instincts, Toporowski is quickly progressing into a lethal offensive force in the WHL ranks. However, despite these facts, Toporowski wasn’t selected in the 2019 NHL Draft — a curious outcome considering the fact that he arguably outperformed Sasha Mutala of the Tri-City Americans, who was chosen in the fifth-round by the Colorado Avalanche.

Max Wahlgren was the fourth highest-scoring 2001-born player in the SuperElit this year, however, his impressive offensive output was not enough to warrant a selection in the 2019 NHL Draft. Defined as an aggressive power forward, Wahlgren loves to be in possession of the puck and isn’t afraid to drive hard to the net in order to generate offence for his team. This mentality sees Wahlgren mix things up physically with his opposition quite frequently, as the youngster is by no means afraid to stand up for his teammates regardless of the situation. At the end of the day however, Wahlgren’s true value lays in his offensive abilities — the young ‘Swede can rip the puck on goal as well as play-make, a reality which makes his neglect in the 2019 NHL Draft even more startling.

The 2018-19 season began on a high-note for Josh Williams, as the former fifth-overall selection scored five goals in his five games played at the 2019 Hlinka Gretzky Cup. This output caught the eyes of scouts throughout North America, as it appeared as though Williams was destined for a dynamic season with the Medicine Hat Tigers.

However, after playing to a half-a-point per-game pace through 41 games, Williams was traded to the Edmonton Oil Kings in new year. Once in Edmonton, Williams’ rate of offensive production remained relatively the same — the likely reason why he wasn’t chosen in the 2019 NHL Draft. Yet, based on his skill set and potential, don’t be surprised if Williams explodes offensively in 2019-20 in his first full season with the Oil Kings.