Posted on September 10, 2019 by Prospect Pipeline Leave a comment

With pre-season hockey well underway and the 2019-20 regular season upon us, the time has come to unveil our 2020 NHL Draft Ranking for the month of September.

Since publishing our off-season 2020 NHL Draft Ranking in June, a great deal of change has taken place. Although the NHL Draft itself remains a whopping ten months away, prospects eligible for the upcoming Entry Draft have already begun to battle for seeding as they enter into what will be arguably the most important campaign of their respective playing careers… to date.

For most, the first opportunity to impress during the 2019-20 campaign came during the annual Hlinka Gretzky Cup — a tournament held in early August which saw Team Russia claim the Gold Medal over Team Canada in a hard-fought championship game. All throughout the event, players from eight powerhouse hockey nations strove to showcase their unique abilities while establishing themselves as high-end NHL prospects. For some players, excellent showings in the event allowed them to vault up various draft rankings, while others stumbled in the spotlight and have slipped slightly as a result. 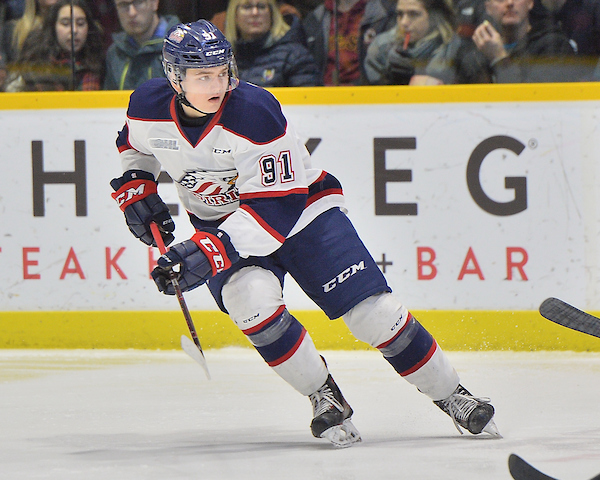 However, it is important to remember that players are evaluated over the course of the entire season rather than during strictly one tournament alone. This reality will allow a vast numbers of prospects to dramatically improve their skills and abilities ahead of the the 2020 NHL Draft — after all, everyone develops at a different pace both physically an technically.

With this being said, let’s dive into September’s Draft Ranking to attain a greater understanding of this year’s draft class — after all, it is absolutely loaded with high end talent.

Well, here it is — our second NHL Draft Ranking of the 2019-20 season. As mentioned above, be sure to check out our off-season Draft Ranking to gain a greater understanding of how each and every prospect has either progressed or regressed to kick-off the current campaign. There’s a whack of elite talent eligible for the 2020 NHL Draft, so be sure to take a moment and familiarize yourself with the names below.

As we progress through the campaign, we’ll also begin to include in-depth prospect profiles for the majority of the players which you see below.

And, as always, feel free to drop a comment on our ranking below the article to kick-start the conversation surrounding this year’s crop of talented youngsters.

Although they weren’t able to crack the top-31 in this month’s edition, keep a close eye on these 20 honourable mentions — all of which have the talent and potential to develop into first round selections come June of 2020.