Is Jack Hughes the Next Patrick Kane?

Posted on September 7, 2018 by Prospect Pipeline Leave a comment

Jack Hughes of USA Hockey’s National Team Development Program is an elite if not generational talent who stands poised to dominate the NHL for years to come.

Founded upon exceptional skating abilities, Hughes moves the puck incredibly well and is a threat every single time he steps onto the ice. As unpredictable as he is lethal, Hughes keeps his opponents on their heels owing to his ability to both pass and shoot the puck with absolute authority.

Capable of playing on his team’s power play and penalty kill, Hughes is a versatile all-around threat who can create potent offensive plays in the blink-of-an-eye. Able to steal the puck from opposing players with ease before meandering his way through defences, Hughes’ quick and agile feet and sky-high hockey I.Q. allows him to dominate each and every game in a seemingly stress-free manner.

Hughes’ combination and execution of these abilities at such a young age can be best defined as nothing other than exceptional.

So, it should come as no surprise to learn that Hughes has earned a bevy of player comparisons throughout his career to date, with none more accurate than the similarities between he and current Chicago Blackhawks star Patrick Kane.

Jack Hughes: The Next Patrick Kane?

When it comes to Hughes and Kane, the likeness between the two is incredibly striking.

Like Hughes, Kane is a product of the USA’s NTDP, and honed his game while skating with the program during the 2005-06 campaign. Although the season Kane spent with the team preceded his first year of NHL-draft eligibility, the native of Buffalo, New York still managed to record 52 goals and 102 points in his 58 games played for the program.

How did Kane do it?

Well, like Hughes, Kane excelled largely as a result of his impeccable skating abilities and elite-level hockey I.Q. Confident and poised while in possession of the puck and rarely forced into mistakes or turnovers, Kane’s composure with the puck at an early age allowed him to drive his team’s offensive game with relative ease.

Like Kane, Hughes is a puck-hound who creates with consistency. (Photo Credit: Rena Laverty and USA Hockey’s NTDP)

In addition to the calm displayed by both players, it is both Hughes’ and Kane’s crafty hands, stick-handling abilities, and creativity with the puck that allows the two to mirror one another.

Like Kane, Hughes is a magician with the puck who seemingly keeps it tied to a string. Able to pick the puck out of scrums and capable of controlling possession through the sticks and legs of opposing defenders, Hughes’ ability to command the puck in traffic while generating high-quality scoring chances is a pleasure to behold.

Having created both time and space for themselves through tactile positioning and poise, both Hughes and Kane can then wire the puck on goal or pass it off to a teammate laying in wait.

Perhaps the only similarity the two star players share — and one which is often viewed as a weakness — is the pair’s lack of substantial size. Standing 5-foot-10 and 175-pounds, Kane is never the biggest player on the ice, and neither is Hughes who stands a very similar 5-foot-10 and 165-pounds in his own right.

However, despite this perceived deficiency shared both players, each has learned to adapt to the challenges placed upon them by today’s game. Given their elusive nature and on-ice intelligence, both Hughes and Kane have the generated the proven ability to avoid players of an intimidating stature while still playing an incredibly valuable role for their respective teams.

When the 2019 NHL Draft takes place in Vancouver, British Columbia on June 21-22nd, expect the similarities between Hughes and Kane to continue.

In 2007 — following a jaw-dropping 62 goals and 145 points in 58 games played for the London Knights of the OHL — Kane heard his name called by the Blackhawks with the first overall selection in the NHL Draft. Given his immense skill-set and proven production, Chicago’s selection of Kane was a mere formality.

And, when Hughes heads to Vancouver for the 2019 NHL Draft, expect the case to be eerily similar. 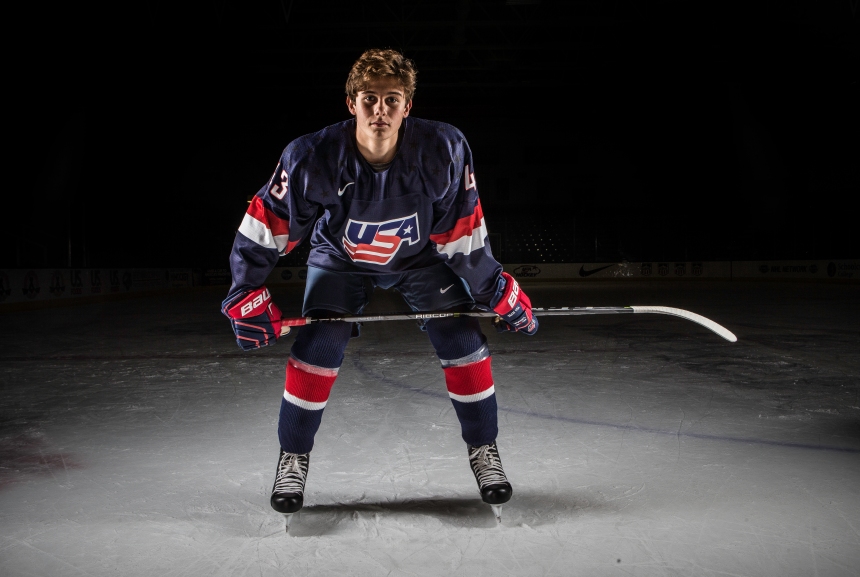 At the 2019 NHL Draft, Hughes will likely become just the second American chosen first-overall in the past decade. (Photo Credit: Rena Laverty and USA Hockey’s NTDP)

Considering his incredible play for USA Hockey’s NTDP to date, Hughes’ first overall selection in the coming NHL Draft is virtually all but set. Although an excellent group of other prospects stand poised to challenge the native of Orlando, Florida for the distinction, Hughes’ play to date — and his similarities to Kane — make the youngster’s services far to valuable to pass up.

So, although the 2018-19 season remains in its infancy, expect the NHL to welcome yet another generational talent to its ranks in the immediate future.

And, while Hughes is clearly similar in playing style to Kane, who’s to say that the top-prospect won’t eclipse his fellow American at the NHL-level and — one day — challenge Connor McDavid for the scoring title?