Posted on September 25, 2018 by Prospect Pipeline Leave a comment

The Boston Bruins are a legitimate Stanley Cup contender.

Despite falling to the Tampa Bay Lightning in the Eastern Conference Semi-Final last season, the Bruins are a deep team loaded with skill at each and every position on the ice. What’s more is that Boston boasts players both young and experienced, making their success more sustainable than ever before.

And, fortunately for the Bruins, more elite young talent is on the way.

The State of the Bruins’ Farm System

In 2017-18, former prospects Charlie McAvoy, Jake DeBrusk, Danton Heinen, and Anders Bjork all graduated to the NHL-level and were wildly successful in their transition. While McAvoy was a minute-munching pillar for the Bruins on a nightly basis, DeBrusk, Heinen, and Bjork all played significant offensive roles and proved crucial to Boston’s impressive 112-point campaign.

Now, although the Bruins’ prospect pool has thinned since last season, it does remains strong and jam-packed with players who could one day leave lasting impressions at the NHL-level. 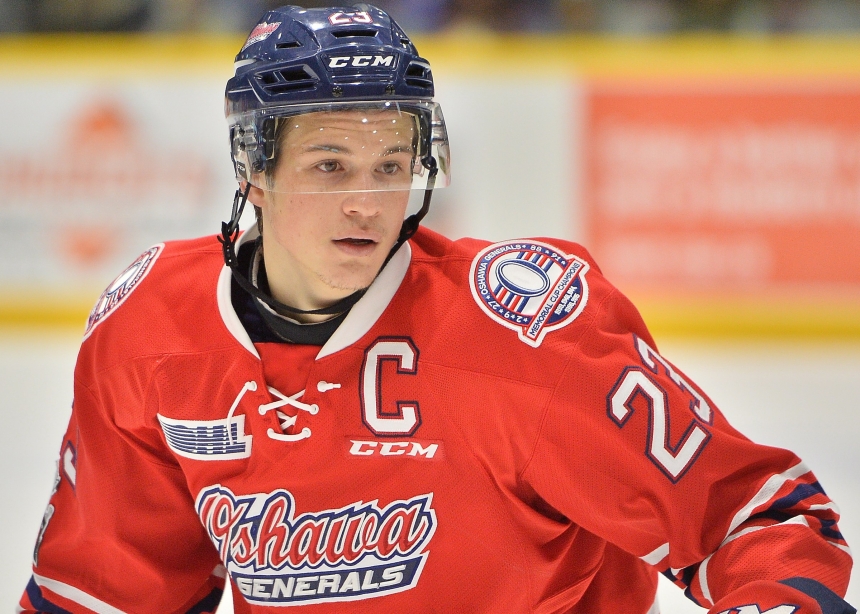 Jack Studnicka is set to return to the Oshawa Generals for the 2018-19 campaign. (Photo Credit: Terry Wilson/OHL Images)

Of the group, it is Jakob Forsbacka Karlsson who owns the greatest potential — despite average speed, the young ‘Swede enjoyed a statement season with Providence in his first AHL campaign. In addition to Forsbacka Karlsson the Bruins boast Ryan Donato, a former standout for Harvard University who represented the United States at the Olympics and also nabbed nine points in 12 games played with the Bruins late in the 2017-18 campaign.

Although Boston does not own an elite-level prospect per se, the organization is saturated with young players who could one day fill important depth roles for the team. So, while the Bruins’ farm system has been stronger in recent years, it remains perfectly capable of sustaining Boston’s success in both the short and long-term.

One Bruins Prospect to Watch

If there was one Bruins prospect in particular to watch, he is none other than Donato.

Despite being chosen by Boston 56th overall in the 2014 NHL Draft, Donato has slowly yet surely developed into an elite NHL prospect. Following two solid seasons to begin his NCAA career with Harvard University, Donato exploded in his junior season and collected a whopping 26 goals and 43 points in just 29 games played.

Donato was so impressive, in fact, that he was able to secure a place on Team USA’s roster for the Olympic Games in South Korea. Not intimidated by the situation, Donato recorded five goals and six points for his country — an indication to the hockey world that Donato was a young superstar in the making.

It's a W for USA! 🇺🇸
Ryan Donato leads the way with two goals in a 2-1 win over Slovakia! pic.twitter.com/LNgLFgZraz

After arriving back in North America, Donato quickly took to the ice with the Bruins and continued his torrent play. Although he would skate in just 12 regular season contests for Boston prior to the end of the season, Donato was impressive nonetheless — notching five goals and nine points.

Set to begin the 2018-19 season with the Bruins, Donato stands as a dark-horse candidate for the Calder Trophy as the NHL’s Rookie of the Year.