Posted on October 11, 2018 by Prospect Pipeline Leave a comment

The Philadelphia Flyers are a force to be reckoned with within the Metropolitan Division, however, the franchise has long been plagued by a lack of consistent goaltending.

Fortunately for the Flyers, this disturbing trend appears to be coming to an abrupt end, as the organization finally boasts a goaltender who could backstop the team to significant success in the near future. However, the strength of Philadelphia’s farm system is not limited to the exploits of just one player, as a strong secondary class of promising young Flyers has emerged in recent years.

If able to receive sturdy goaltending in the coming years while being reinforced by these developing young players, Philadelphia could piece together a shockingly successful postseason run while sustaining their success for many seasons to come.

The State of the Flyers’ Farm System

The future of the Flyers’ franchise revolves around goaltending.

In recent years, Philadelphia has struggled desperately to receive consistent goaltending. Having platooned a number of different goaltenders of late better suited for backup roles, the Flyers’ external search for a legitimate starting netminder has proven to be a fruitless endeavour.

However, during these trying times, one of Philadelphia’s goaltending prospects has progressed rapidly and should now be viewed as a future pillar of the franchise. Nabbed by the Flyers with the 48th overall selection in the 2016 NHL Draft, Carter Hart has secured three consecutive Del Wilson Trophies as the WHL’s Goaltender of the Year and has shown no signs of slowing down.

Hart is a technically sound goaltender and as consistent as they come. (Photo Credit: Marissa Baecker/CHL Images)

At 20-years-of-age, Hart is a highly athletic yet composed goaltender who makes calculated decisions within his crease. Never one to overplay a shot or be caught out of position, Hart situates himself strategically and cuts down shooting angles with remarkable consistency. Long a standout for the Everett Silvertips of the WHL and a star with Team Canada at the 2018 WJC, Hart has all the makings of a dynamite goaltender at the NHL-level if provided with further time to develop.

Once Hart ascends to the Flyers, Philadelphia could very well boast one of the Eastern Conference’s deepest attacks. With the likes of Claude Giroux, Jakub Voracek, and Sean Couturier already leading the charge, look for Joel Farabee, Morgan Frost, and Isaac Ratcliffe to play important depth roles for the franchise.

In Farabee, the Flyers boast a versatile winger and natural goal-scorer capable of playing in all situations. Next, in Frost, the organization holds a highly competitive speed-demon who sees the ice incredibly well and can operate within it with ease. Finally, in Ratcliffe, Philadelphia owns a towering winger who is not only an intimidating force but an excellent offensive threat.

If Hart — as well as the forwards named above — can develop with both consistency and pace, the Flyers could suddenly boast one of the deepest rosters in the NHL. Now, it goes without saying that Philadelphia would also do well to land one of Phillipe Myers or Samuel Morin at the NHL-level in the coming years, as doing so would provide the Flyers with unparalleled depth at seemingly every position on the ice.

One Flyers Prospect to Watch

Although he is a former first round draft choice of Philadelphia, Frost remains one of the franchise’s most over-looked prospects.

Since his selection by the Flyers at 27th overall in the 2017 NHL Draft, Frost has done nothing other than dominate the OHL on a nightly basis. In his first season with the Sault Ste. Marie Greyhounds following his selection by Philadelphia, Frost blasted home 42 goals and 112 points in just 67 regular season contests — a campaign which further cemented his status as an elite NHL prospect. 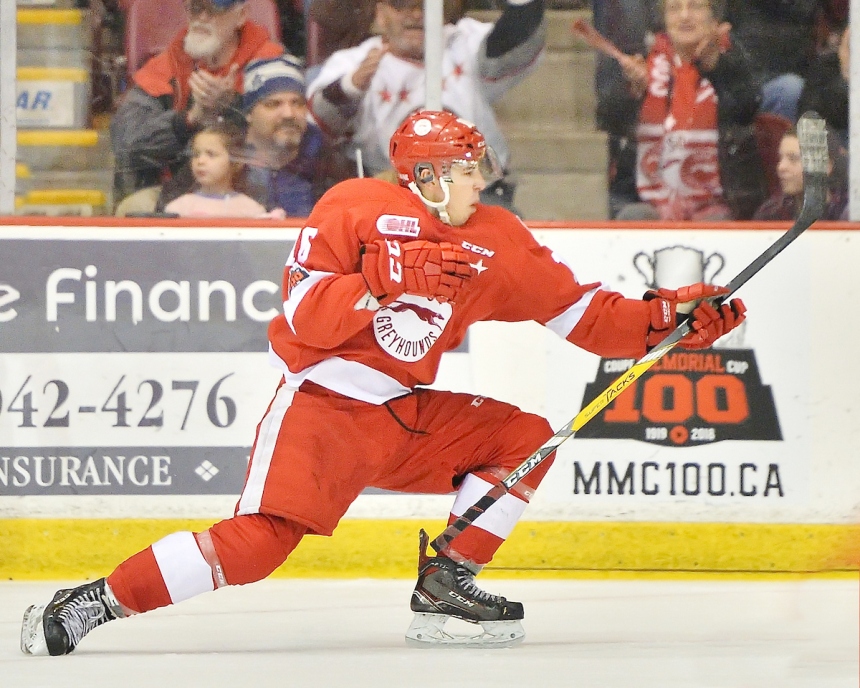 While he isn’t the biggest player on the ice given his 6-foot, 185-pound frame, Frost has long been one of the smartest. Uber-calculated in his decision-making and blessed with excellent vision, Frost can create plays with ease or rip the puck on net owing to his underrated shot. Boosting Frost’s stock is his sky-high compete level and willingness to battle in the dirty areas of the ice.

Regardless of what it takes to succeed, Frost is willing to go the extra mile for his teammates and is determined to earn a favourable outcome for his team.

Once again set to skate for the Greyhounds in 2018-19, Frost will likely compete at the OHL-level for the final time this year before jumping to the professional ranks in 2019-20. Although he will need some time to acclimate to the AHL-level, Frost has the on-ice awareness and drive necessary to ensure his NHL debut in the immediate future.